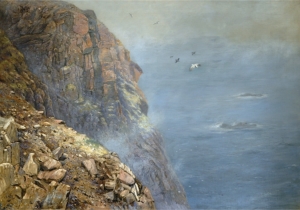 On Friday 15th June 2007, the George Edward Lodge Trust had helped to secure one of George Lodge’s largest oil paintings of a White-tailed sea eagle being mobbed by three hooded crows.  The painting is dated 1915 and depicts the last known sea eagle in the British Isles, which lived and bred on the Shetland Isles.  She was Albino and the locals had protected her for over 30 years.  Eventually she was shot in 1918 and the sea eagle became extinct in Britain.

This painting along with others was sold by Rowland Ward Galleries, London in 1954 after Lodge’s death, and has been in America ever since. This epic piece of art (dimensions 42”x 60”) was then purchased by Brian Bird Trustee, and so securing its  future within the Trust – It would have been a shame to let this one get away!

Dick Treleaven Trustee, George Lodge’s last pupil had mentioned some years ago of the  oil paintings, which graced the walls of Lodge’s studio in the 1950’s, this being one of them.  There were many others, but finding these large oils is extremely difficult as most have probably left our shores. We had no idea initially what this painting was, and even the vendor thought it was a white Gyr-falcon, with a few birds flying over a coastline.

Up to this time no one knew where this painting was, and so you could imagine what a thrill it was when I emailed Dick Treleaven with the image.  Dick enlightened us all by saying “this is the Albino White-tailed sea eagle that George Lodge showed me in his studio over fifty years ago.”

The Trust has discovered something special for Natural History in the British Isles, and ornithological circles, as it is a unique record of the past.  What a find, and luckily for us we had Dick on board with his many years of knowledge, identifying a painting that could have been easily over-looked by the layman, and lost as part of our heritage.  Dick rightly stated, “This oil painting is one of George Lodge’s most complete.”  Lodge shows within this work that he only painted what he saw.

These are George Lodge’s own words from his book, Memoirs of an Artist Naturalist, published by Gurney and Jackson, 1946. VI. EAGLES AND OSPREYS

The golden eagle (Aquila chrysaetus chrysaetus L.) is still fairly numerous in the Highlands of Scotland, but the white-tailed eagle( Haliatus albicilla L.) is no longer a resident breeding species in Britain.  One or two stragglers are seen almost every year; they are probably Norwegian birds on passage.  The last resident example of this fine
bird was an albino specimen which lived on North Roe, one of the Shetland Islands, for about thirty years.

Originally it had a norm al-coloured mate, and bred for the last time in 1908.  They generally used the same nest year after year but at one time, Meade-Waldo told me, they had another nesting site on the island.  He remembered seeing the nest but at that time it was occupied by a pair of peregrines.  My personal experiences of this eagle are given from my diary:

“June 28, 1914.  North Roe.  Meade-Waldo, Ogilvie-Grant and self, with James Hay the
watcher, went to where the sea eagle lives.  We saw her from a long way off, like a white spot on the cliff below the old nest which is still there on a 500-foot cliff. “She was very wild and flew off and away and we did not see her again.  She is quite white and looks as white as a gull while flying.  This shelter was a big crack or chimney,
with a split in the side opposite the entrance, from where we could look across to the nest which was about 100 feet from the top of the cliff.  I spent a time here making an oil sketch of the nesting cliff; but it was a horrid cramped position and a bad afternoon, blowing half a gale of wind and driving thick drizzling mist across.  I was fairly well sheltered and worked for one and a half hours, but was then too cold and cramped to continue so went home in the rain.”

“June 30, 1914.  Very windy.  Went again to see the eagle.  She was not in sight when we got there.  It was too windy to paint so I made a pencil sketch of the rock in the immediate vicinity of the nest.  While so engaged a hoodie crow continually mobbed something round the corner where we had no view, as it was shut in by the rocks on our left.  Meade-Waldo and Ogilvie-Grant therefore went out to the top of the cliffs to investigate, and out flew the eagle mobbed by two or three hoodies.  I had a very short view of her as she passed across my crack opening at a distance of about a hundred yards.  I noticed that her primaries were not white but appeared to be light brown.

The nest seems to be a mass of rubbish and looks just like the surrounding rocks.  We could
see no trace of sticks, which lack would probably be due to wear and tear and stress of
weather.  However, I got material for a picture and the wild weather if eminently in
keeping with the subject.”

“July 10, 1922.  North Roe.  Meade-Waldo and I went for a long ramble with James Hay the watcher.  We made for the Red Banks, the old nesting site of the albino sea eagle which was has not been seen by Hay since 1918.  On the way there we were bunkered by a burn in spate, up which we had to go for two miles before we could cross.  We turned downstream again and went to the old place where I made the sketches in 1914.  There is now not a vestige of the nest to be seen.”

“July 13, 1922.  Mr Ratter, the bird photographer at Lerwick, told us he had heard of a pair of sea eagles having been seen at two places in the Shetlands this spring, one of these places being Muckle Roe and the other Sandness, farther south on the west coast.  He also introduced us to a young man whose father has seen two sea eagles at Ollaberry this year;  also that he had heard that the old white sea eagle of the Red Banks was shot in 1918 by an old man.  What had been done with the body he either could not or would not tell us.  This date coincides with the time James Hay ceased to see anything of it.” There has been much correspondence between the Tryon Gallery and the vendor over the sea eagle oil painting, and here are some comments by the vendor.

12th June 2007
I’m particularly pleased, as I really did want the painting to return from whence it came – to find a home in England where it belongs, given that I would no longer have it hanging here.  All the more fitting that it goes to a Lodge Foundation. That’s the stuff of storybooks!
The Tryon Gallery has informed the vendor to the full story on the albino sea eagle.

20th June 2007
Indeed it does make interesting reading.  I’m afraid I wouldn’t make it in ornithological circuits.  But I’m delighted to be enlightened.  Sea Eagle is certainly more awesome than Gyrfalcon.  Do these eagles still exist? I hope other environs were more successful.  What a catching story. I shall never tire of any of these Lodge’s.  We’ve so enjoyed them over the years.  I well remember mother struggling with the placement of the two large oils Dad had managed to procure in London.  After a notable arrival at Squirrel Run (my parents home), there was lively discussion on the subject.  Finally, both agreed on a hallway leading to the dining room.  There was room on both sides for a “left and a right” and there they hung.

I suppose, all told, they were fine there – just enough light to see them pass by.  But it was hardly a central spot in the stair hall on axe with the entrance door. I always thought they deserved better.  Five feet is just a bit myopic for works of this scale.
After mother’s death in 1984, their tangibles were divided amongst we three sons.  I became the hero of “Lodge Hall.” I took them both gleefully, together with some other works of his and sent them straight taway to a restorer in New York, there to have three decades of dust and cigarette smoke removed.  What a difference that made.  I chose the frame you have and voila.  Of course, my wife Stacy and I had another lively discussion, for our country home was much smaller than Squirrel Run.  I felt like the dung beetle who rolled home the rugby ball – proud as punch and equally confounded.  But, never fear, our still smaller home in Nantucket was by the sea.  Believe it or not, we found two spots to hang the large Lodge’s – the peregrine over an immense blanket chest just long
enough to accommodate it; the Sea Eagle over a sofa of normal scale, which it dwarfed.

The rest of the tale you know.  The sequel you must write.

I would be interested to learn more about the new Lodge Foundation.  As I wrote you, I’m chuffed to see this first large oil in that sort of venue.  These paintings went abroad, to be sure, but now back from the sea, their home is in England.  With Best Regards