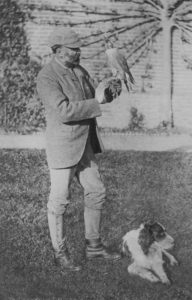 The Hon. Gerald Lascelles with falcon and spaniel.

The George Edward Lodge Trust is assisting Hartland Abbey in North Devon to paint a picture on Falconry by Gerald Lascelles.  Gerald Lascelles (great grandfather of the present owner of Hartland Abbey, Sir Hugh Stucley) was an author and Deputy Surveyor of the New Forest from 1880 to 1914.  He had a passion for the noble art of falconry, which lasted a lifetime.

There will be an exhibition on falconry, which includes taxidermy falcons and hawks owned by Lascelles, reproduction of artwork by George Edward Lodge, Joseph Wolf and falconry implements on display.

George Lodge was the go to artist on birds of prey and falconry for book publications.  His superb pen and wash drawings are in Gerald Lascelles Falconry (1892) originally published as part of The Badminton Library on Coursing and Falconry.

Falconry is a living human heritage and continues to flourish around the world today.  The sport is present in 60 countries and although practices may vary, the methods remain similar.  Many practising falconers breed, train and fly their birds – this unique bond between falcon and falconer provides detailed understanding of the natural world.

Lundy Island in the Bristol Channel can bee seen off the Hartland peninsula.  Historically, Lundy Peregrines were highly prized by falconers and had a reputation of being the finest Peregrines for falconry.  The Peregrine progeny of Lundy has produced many famous game hawks in the 19th and early 20th centuries. 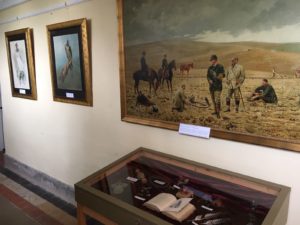 British falconers rely on captive breeding of the Peregrine falcon for their sport, and it is illegal to take a wild Peregrine unless under strict licensing laws.  Falconers have pioneered captive breeding programs around the world, and this knowledge is helping with conservation work.