A GUIDE TO THE BOOKS, CATALOGUES AND JOURNALS CONTAINING ILLUSTRATIONS BY GEORGE E.LODGE

In the late 1940s when wandering down Piccadilly, my eye was taken by some paintings of falcons in Rowland Ward’s window.  The pictures portrayed cold, sharp-eyed gyrfalcons perched atop lichen covered boulders, staring out into Arctic wastes; a welcome change from the plethora of ducks endlessly flying against purple sunsets which frequently adorn the walls of suburbia.  I decided there and then that this was the way I wanted to paint.  I asked the Hon Aylmer Tryon, a director of the gallery, if it would be possible to meet the artist.  He gave me George Lodge’s address and suggested that I write to him. 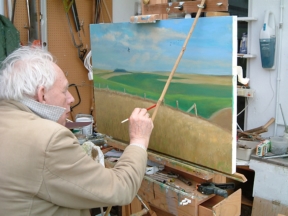 The encouragement and enthusiasm of the founder Trustee, Dick Treleaven MBE, in the formation of the George Edward Lodge Trust should never be underestimated. As George Lodge’s last pupil he made an invaluable contribution and it is with great sadness that we note that he passed away in December 2009.

George Lodge was born at Horncastle in Lincolnshire, one of a family of eleven children. From an early age he and his brother R.B. Lodge, the pioneer bird photographer, were keen naturalists, roaming the local countryside in search of subjects.

It must be close on seventy years ago that George Lodge and the writer of this Foreword met for the first time in the Bird-Room of the Natural History Museum, when he was visiting his friend Bill Ogilvie-Grant, then Deputy Keeper of the bird collections. I was but recently down from Cambridge and a great deal of water has run under the bridge since then. Lodge was twenty-six years my senior and I knew him to be ranked with Archibald Thorburn as a master-painter of birds; indeed that great artist admitted that, as a portrayer of Birds of Prey, George Lodge had no equal. His Game Birds were to my mind in the same category as exemplified by his plates in Beebee’s magnificent Monograph of the Pheasants. Like so many great artists he never received the appreciation due to him until after his death.

“This is not an easy subject to write about and must not be approached with assurance or dogmatism, as everyone who studies art has his own ideas and methods and, quite rightly, follows and uses them in order to get the results that appeal to him.”